How a husband and wife from Long Island started a Salumeria in North Carolina...

Giacomo and Laura Santomauro both grew up surrounded by authentic Italian food.

For Giacomo, the son of Italian-American immigrants, it was a reality that was hard to avoid: his father owned several restaurants on Long Island. As a true family business, all of his children were expected to pitch in from a young age, including Giacomo, the youngest sibling.

At the time, it couldn't be further from his passion: Giacomo dreamed of being a New York firefighter.

Unfortunately, earning a job as one proved harder than he expected, and, while a useful skill in the kitchen of his father's restaurant, knowing how to make homemade sausage wasn't all that helpful in the face of a 3-alarm fire.

After sending dozens of applications to fire departments up and down the east coast, the High Point, North Carolina Fire Department took a chance and offered him a job.

Suddenly, Giacomo and his wife Laura packed their bags and headed south to somewhere they'd hardly even heard of: High Point, NC.

They were fish out of water and just a little bit homesick. Turning to food for comfort, the classics they were accustomed to were almost impossible to find, and BBQ was getting old. The favorites they missed – things like quality salamis and capicola, baccalà, pasta e fagioli, and homemade pasta – were hard to come by in central North Carolina.

In 1999, sensing a need and following a passion, Giacomo and his wife Laura scraped together everything they had, drove a loaned deli slicer down from his father's deli on Long Island, and started a small market in nearby Greensboro: Giacomo’s Italian Market.

It wasn’t easy. Using recipes passed down through the generations, the two spent long days and even longer nights ensuring that everything was prepared just right. For the first few years, to help make ends meet, Giacomo even continued to balance a career as a fireman.

Fortunately, it caught on in a big way. By the early 2000's, Giacomo's Italian Market had become a local phenomenon.

Popularity grew, and for a few years, the market even had two locations: the beloved, original store on High Point Rd. (now Gate City Blvd.), and a newer location, at Battleground and New Garden.

Today, the mission set forth by our original store continues at our New Garden Rd location: to provide the Triad with the best Italian specialties possible. From fresh made sausages to hard-to-find imported items, you can almost always find it at Giacomo's.

Something Even Bigger: The San Giuseppe Salami Co. is Founded

Recognizing an even broader need for high quality Italian meats and specialty products, Giacomo expanded his production into a modest USDA-inspected production facility in nearby Elon, North Carolina. At the time, the space seemed huge. Now, almost 15 years later, we're planning an addition!

In 2009, he launched our retail brand for the first time: the San Giuseppe Salami Co. Giacomo chose to honor his mother by naming it for the town outside of Naples where she grew up.

We couldn't have a better home. In addition to a vibrant culinary scene, North Carolina leads the country in pork production. That means we can be as picky as we need to be, and source the finest ingredients available. We never have to settle for anything less than exceptional.

Today, our products can be found in restaurants, markets, breweries, wineries, supermarkets and more across the Carolinas, Mid-Atlantic and beyond.

Even though we've grown a bit from our small strip-mall start, we're still a small, modest company staffed by fewer than 10 men and women. We work hard to make an honest, finely-crafted product.

At the end of the day, the formula for our company has remained simple: the best, local ingredients possible paired with our own family recipes and traditions.

From our family to yours, buon appetito. 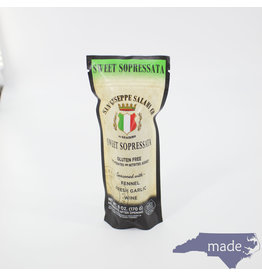 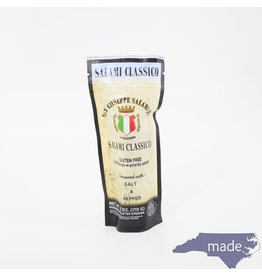 It doesn’t have to be complicated. The Salami Classico, our most traditional salami, is flavored with a mild balance of salt and black pepper. Each of the products below feature our Salami Classico.
Add to cart
Salami Classico
$9.99 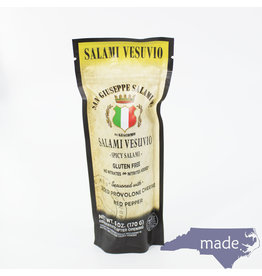 Our spicy Salami Vesuvio is flavored with cayenne pepper and accented with real pieces of aged provolone cheese. It's one of our most flavorful salamis and one-of-a-kind.
Add to cart
Salami Vesuvio
$9.99 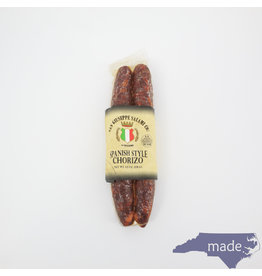 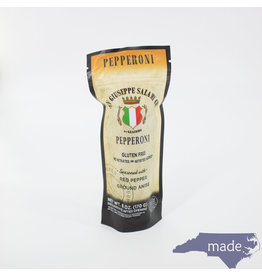 This is not generic, blah-blah pepperoni. It’s full of spicy flavor, crafted with a secret blend of ground anise, red pepper flakes and more. Products featuring our Pepperoni are below.
Add to cart
Pepperoni
$9.99 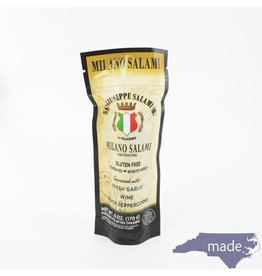 Our Milano salami is crafted with white wine, fresh garlic and whole peppercorn for a distinctive, slightly-sweet full-flavor bite. This is one of our strongest and most distinctive products and is also available as a one-of-a-kind Lamb Salami. Products f
Add to cart
Milano Salami
$9.99 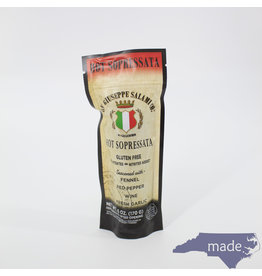